Washing day before the advent of electric washing machines was very much a manual task, and for some would mean filling a huge built-in tub (also known as a copper) in the wash house with pails and pails of water, a fire lit under it to provide ample hot water for a family wash. It didn’t quite start there though, whilst the water was heating, most of the washing had to be pretreated as part of the laundry routine. Whites were left in the sink with bleach to whiten. Before they were added to the main wash handkerchiefs were soaked in borax which was a necessary step, especially during nose blowing seasons! 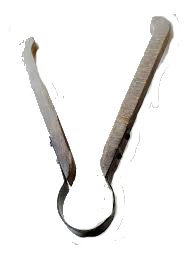 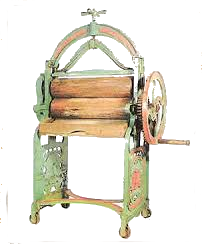 Another aid to whiten clothes was the use of ‘blue’, Drummer Boy and Reckett provided blue tablets to mix with water to dip whites in to brighten them, many laundry powders still have blue specks throug

h them for the same purpose although they say it’s their powder which washes cleaner it isn’t, it’s the blue specks which give the impression of brighter whites, an old trick grannies knew about long ago. Blue has been used for centuries to whiten yellowing cottons. Originally made from ground up lapiz lazuli, making it the most expensive pigment available. Now it’s a mix of synthetic blue and bicarbonate of soda. Cottons and linens also had to be starched, not only did it stiffen the fabric, it made it easier to iron and it stayed cleaner longer.

Wise grannies left bleaching whites to the sun, soaking wet whites hung up, laid out on the grass or hung over hedges until they dried, then repeated the wetting and laying out to dry. The sun is not only the best whitening agent, it’s the best disinfectant as well. Don’t believe the manufacturers of laundry aids about how they have improved washing clothes, the sun was doing that long before they were.

Retired, living in Scotland and trying to find interesting things to grow. I'm a recycler and upcycler but I am not an expert in either. View all posts by themagnoliatreeblog